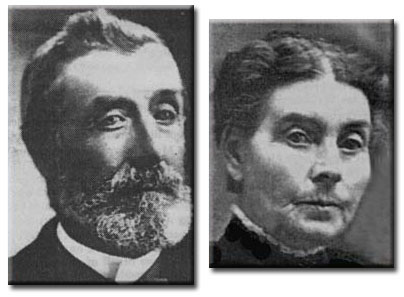 Duncan MacKerricher (1836-1926) was born on his father's farm near Dalesvilles, Quebec, Canada. Jessie Stuart (1837- 1923) was born nearby. Families were of Scottish decent. Duncan and Jessie were married October 14, 1864 and left on the train at once for New York City on their way to Mendocino, California, where they had friends.

At New York City they boarded the liner Ocean Queen and were escorted through the danger zone of the Civil War by the U.S.S. Constitution. Upon arriving at Panama they went over land by rail and boarded another vessel for San Francisco. At that city they boarded a small coastal schooner for Mendocino. The weather was so bad the passengers, could not land on the northward trip and so continued to Eureka, On the southward journey they did succeed in landing.

Duncan worked in the mill for two years and then got a job helping the Indian Agent E.J. Whipple, on the reservation near Ten Mile. After about two years the Indians were moved to Round Valley. Duncan and Jessie MacKerricher stayed and bought the Rancho de la Laguna and about half of the Indians stayed and worked for the MacKerrichers. Within two years they had 69 cows to be milked with the help of two of the Indian boys. Butter from the dairy was mostly shipped to Mendocino and then to San Francisco. Much of the money received from the butter was used to help the Indians. Jessie MacKerricher is reputed to have named the town of Cleone from the Greek word meaning "gracious" or "beautiful". Potatoes were also grown in abundance on the ranch, and the MacKerrichers were also famous for their draft horses. A wharf was built at Laguna Point to load redwood lumber schooners bound for San Francisco. Duncan MacKerricher gave permission to the mill owner located up Mill Creek to construct a gravity feed railway from Cleone to the point. Remnants of the old railway, lumber yard, and pier are still visible in the park.

In 1917, Union Lumber Co. constructed an extension of the California Western Railroad from Fort Bragg to the Ten Mile River. In 1947 the rail bed was converted to a truck road and was finally abandoned around 1968. State Parks acquired the last portion of the old Haul Road, which bisects MacKerricher State Park for eight miles, in 1995 plans are currently underway to develop this road into pedestrian and bike tour.